Looking Ahead To Havasu And New DCB M35

Looking Ahead To Havasu And New DCB M35

by: Written by Jason Johnson

The annual Desert Storm Poker Run is less than two months away so it is obviously on the forefront of many people’s minds—mine included. There’s a lot to get done between now and April 22 since the speedonthewater.com promotional trailer with all-new gear is coming to Lake Havasu City, Ariz., with me, Matt Trulio, Pete Boden and a few of our friends.

In terms of preparation for the 22nd annual event what we have to accomplish pales in comparison to the team at Phantom Productions and the many supporters of the event that help make the poker run and its massive Street Party what is—companies such as Kicker Audio, DCB Performance Boats, Nordic Boats, Teague Custom Marine, Mercury Racing, RiverDavesPlace, Eliminator Boats and many others. 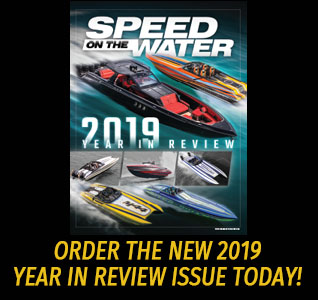 As usual, I know the crew at DCB is going to be as busy as ever organizing what Trulio and I have more than once referred to as the DCB showcase. And I’m not just talking about the Street Party. The team from El Cajon, Calif., starts months in advance coordinating a community dock space, hotel rooms, hundreds of feet reserved along McCulloch Boulevard, apparel, demo rides, shootout participation and more.

And all while still building boats to be delivered before and even during the poker run.

I don’t know every DCB you’ll be able to see on the street party, but I can bet one of the showstoppers is sure to be the new M35 Widebody catamaran powered by twin Teague Custom Marine 1450 EFI engines that was on display at last month’s 2020 Los Angeles Boat Show. Although the 35-footer owned by Nevada’s Roger Primm wasn’t quite ready to hit the water before the show, the immaculate cat sitting on an angle anchoring the DCB display at the Pomona Fairgrounds was completed shortly thereafter and DCB’s Tony Chiaramonte and Jeff Johnston took it out for its initial water test and shakedown on Lake Elsinore a couple of weeks ago.

Check out the slideshow above for more images of the latest 35-foot DCB.
Comments
Previous Article